A friend messaged last night and asked about writing screenplays based on real people and/or historic events.  Specifically, which rights must be acquired in order to avoid litigation.  As you read on, keep in mind I’m not an attorney and this info is based on my unique experiences.

I’ve been on both sides of the issue as author (grantor of rights) and producer (buyer of  rights) and there’s no one-size-fits-all answer.  In fact, you can swing a dead cat in Hollywood and hit half-a-dozen lawyers that specialize in this particular flavor of intellectual property (IP) law. And for good reason.  It can be extremely complex and often confusing.  Following are just a few IP issues to consider:

Let’s say you’re writing a film based on a legendary living musician.  He’s been around since the late fifties and several books have been written about him, and you’re using one of those books to frame your screenplay.  You’re also using public records such as newspaper articles and radio interview transcripts which aired over the last 40 years or so.   And let’s say he did an interview with 60 Minutes that you’re including in the film.

Because he’s alive, you’ll want to secure his life rights, giving you permission to tell his story. You also want his cooperation and a guarantee that he he won’t sue for defamation or invasion of privacy; both of which are covered by the life rights contract.  You’ll then need to secure the rights to the book you’ve been using by optioning it or buying it outright; the former being much cheaper.  This essentially means you give the author a small down payment in exchange for the right to use the book, and if the screenplay is later sold and produced, he gets a larger pay day.  You’ll also have to negotiate a deal with CBS’s attorneys allowing you to use the transcripts from the 60 Minutes interview.  Same goes for newspaper articles and any other media you plan to use, which are also protected by copyright law.  You may have to pay a licensing fee or option for those as well.   This sounds like a lot because it is.  And it can be expensive, too.

So what if the subject of your screenplay isn’t a public figure?  For example, say it’s a co-worker who immigrated to the states as a teen after fleeing death-squads in his home country.  He told his amazing story over lunch, and you’ve decided to write it as a screenplay.  You could probably get away with a life rights contract.  Just keep in mind that should the screenplay sell and eventually make it to the big screen, your friend will likely have book offers and other opportunities popping up.  All because of your movie.  Should you get a taste, or is your contract only for screen rights?  This is best discussed with your attorney.

One way screenwriters (and producers) avoid mountains of IP paperwork is to create ‘transformative works.’  Screenwriters create fictional events and characters that are based on actual events and characters, and transforms the story to differ from the original.  How much one transforms the story is up for legal debate.  10%? 20%?  And just because a writer transforms a story doesn’t mean he’s safe from litigation.  This issue arose during the filming of the Hurt Locker and was battled out in court.

If the subject of your screenplay is deceased, your life just got a lot easier.

If the subject of the life story is deceased, much of the rationale for buying these rights disappears, since defamation and invasion of privacy actions protect personal rights that do not descend to the estate. In other words, people can spread lies and falsehoods about the dead, reveal their innermost secrets, and their heirs cannot sue for defamation or invasion of privacy on behalf of the deceased person. A writer could publish a revisionist history of George Washington, portraying our first President as a child molester and a thief, and his heirs would have no remedy. So when a subject is deceased, a producer has less need for a depiction release. The right of publicity may or may not descend to one’s heirs, depending on state law.

Mark’s advice is good medicine.  Also keep this in mind regarding dead guys.  If you used a book that’s still protected under copyright law to adapt your screenplay, you’ll need to acquire the rights even if the subject is dead.  If the book is not protected by copyright law or the protection has expired, you’re good to go without acquiring the rights.

Same goes for historic events.  Say you’re writing a screenplay based on the Battle of Gettysburg.  There’s tons of source information in the public domain and you can write directly from it.  You can even name names without fear of legal recourse.  Just stay away from sources protected by copyright.

And we haven’t even touched on Fair Use, which I’ll save for another day.  For now, just know that certain laws exist that allow you to use whatever the hell you want, if that particular use meets certain legal criteria.

Hit me back with any questions.

Posted by Mactavish on Jul 12, 2019 in Entrepreneurship, Tomfoolery, Writing | 0 comments

Quick tip for those of you aspiring to create things for a living.

Maybe you’re writing the next great American novel, or cutting together a masterpiece destined for Oscar greatness.  Or you simply make jewelry at home and sell it on Etsy.  Whatever.  Now this may sting a little, but regardless how great your product turns out, some people will hate it and state their opinions very publicly.  Yes, even you, guy over there with the ventriloquist dummy.  Especially you.  But I digress.

My first book was meant as a humor parody mashup of military manuals and fatherhood books.  It was intentionally goofy with a few real nuggets of wisdom thrown in just to prove I actually pro-created.  It even states so in the preface pages.  However, certain readers took the book as gospel and blasted it (and me) very publicly across various sites, including Amazon and Good Reads.  And I made the mistake of rebutting the criticism.  I should have let it go and accepted the fact that most readers, those that got the humor, loved it.  But no, I had to get my hillbilly on and kick off a flame war, which did nothing but fire up the other haters and make me look like a defensive, over-sensitive kook.

So here’s my advice: Let it go.  Engage with your audience but stay away from the Crazy Screechy Monkeys.

Here’s a great post by author John Scalzi, who’s sold a couple of books.  (Actually a couple of million.):

If you’re a parent, you’ve probably read this book to your wee ones: 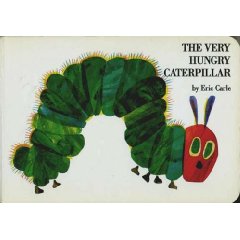 Care to guess how many of these have sold over the years?

And that’s just one of his books.  He’s probably making 10% – 15% percent of the retail price, according to a typical publishing contract.

It’s good to be the Carle.

I am indeed, a writer with a filmmaking problem. I got into show biz as a writer, and found that I had a certain knack for the tactile processes of producing and directing. However, I’ve always been most exhilarated by the writing process, and have found opportunities in Hollywood to be limiting at best and demeaning at worst.

A couple of years ago I wrote The New Dad’s Survival Guide and learned that the publishing world treats writers exponentially better than the movie world. Go figure.

Now that my book is close to earning out, I’m becoming even more enamored with writing and less enthralled with motion pictures.

I reckon filmmaking is too much a part of my DNA to let it go completely, so I’ll discuss it here from time to time, when the mood strikes. But for the most part, I’ll devote my random spleen-spews to the business of books and those that write them, including me.

That’s it for now.