Categories Menu
Home » What the..?

Umm … where am I supposed to land this thing?

A ham-fisted pilot from Virginia nearly caused a major disaster at Kennedy Airport when he brought his single-engine plane down for a landing in the path of a Boeing 747, sending controllers scrambling to get other planes out of his way, according to a published report.

Hundreds of lives were threatened over the weekend as small-towner John Prendergast la-dee-da-ed his way around the sky trying to figure out where on earth Republic Airport in Long Island was, reports The New York Post.

“I don’t know what he’s doing – he’s going everywhere,” gasped an air controller as he radioed passenger jets to tell them to steer clear of an “unknown aircraft.”

Dazed and confused, Prendergast made a few 360-degree turns near Kennedy before he finally figured out where he was supposed to be (not where he was, naturally) – and was guided to the Farmingdale airport by an NYPD chopper sent to get him out of the way, according to the Post.

The 69-year-old retired Navy pilot failed to make radio contact with controllers, which he should have done, after taking off Saturday morning from an airport in Martinsburg, Va.

Piloting a two-seat RV-7A experimental plane he built himself, Prendergast made his way up the Jersey Shore, nearing New York. He had planned to fly over water to Robert Moses State Park, then go north and west to Republic, but he somehow ended up farther west on Long Island, flying just east of Kennedy, according to the Post.

Then, to the shock of air traffic controllers, the blundering pilot flew farther north and turned around as if he were going to land with the passenger jets on Kennedy Runway 22L.  A Boeing 747 on its way to New York from Atlanta actually flew over Prendergast’s small plane at one point and had to abandon its landing, the Post reported.

Prendergast hasn’t been charged with anything, but the Federal Aviation Administration is investigating the incident. He couldn’t be reached for comment yesterday, the Post reported.

From time to time, it’s important to take a breath and enjoy the unbridled talents of the art world’s finest.

Brandon Bird is one of those unique souls who conveys profound, aesthetic ..

Here’s a sneak preview. A flock of geese carries Captain Picard into oblivion.  (Click to enlarge.) 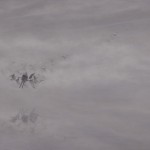 I saw one of these in action several months ago, and was quite impressed with the resolution. When the wife’s old Dell monitor crapped out, I found the HannSpree at Best Buy for an incredible price. Considering I’m a cheap, deal-sniffing bastige, I snatched it up and ran to the truck, laughing like a hyena. HD computing glory would soon be mine. (OK, hers.)

Once the monitor was installed, I did a test run and everything worked, sort of. The images were slightly compressed, or ‘scrunched down’ as my middle son described it. I tweaked the display settings, to no avail. So I then did what any self-respecting technoid would do: Google it.

Within .89 seconds, I had the answer: The HannSpree 19″ only works with Vista, or, if you have a certain Radeon graphics card installed. Hey HannSpree- Thanks for telling me that in advance, toolbags. Anyway, I checked around and found a Radeon card for cheap (see a theme here?) and will soon test the set-up. Otherwise, I’ll have to buy a new desktop, or upgrade to Vista. Or better yet, convince the wife to join me on the Mac side.

Which leads to point two…

I’m a Mac guy. I love everything about them, or at least I did until my eMac gave me a metaphorical mule-kick in the plums.

For those of you that don’t know the eMac, it’s a one-piece machine made in the early to mid-nineties, primarily for educational use. The 17″ version with Superdrive is an outstanding and robust machine, and you can get them for nothing on EBay. They’re perfect for kids or office use, and are generally indestructible as long as you don’t have to take the damn things apart.

I’ve owned an eMac for two years, and have used it extensively for every imaginable task, from writing inane spleen vents like this one, to editing video for broadcast with Final Cut Pro. Last week, I decided to remove the case and give it a good spray down with the compressed air; you know, set some of those damnable dust-bunnies free, and all that. The case lifts off of the main unit very easily…except for a tiny wire leading from the power button to the main internal unit, where it plugs in to a microscopic receptacle a half inch inside the case.

The wire itself was not a big deal. I moved cautiously while removing the case, and it separated from the receptacle with no damage. But getting the damn thing back in is impossible, by my estimation. A quick Google search revealed dozens of other eMac users with the same complaint. One guy even used a freakin’ surgical hemostat to re-connect the plug.

After three dozens attempts, I finally gave up, which was probably a good thing since one of the hair-thin wires in the wire broke in half. Now I’m stuck ordering a new power button kit, or, I’ll simply retrieve the hard-drive and memory from the unit and find another computer for fun and games.

Listen up, computer makers. Use your head when you make stuff, eh? These two massive failures could have been avoided had you simply asked the neighborhood 13-year old computer geek to look at the plans in advance. Now, I have to expend considerable time fixing these things, or shopping for a newer, better model. (Refurbs for my cheap ass, heh.)

I got married in a kilt and looked fresh.

It’s a good thing Craig Jessop wasn’t at the wedding; he may have found himself at the business end of an ass-whuppin’.

From the Associated Press:

WEST HAVEN, Utah – The principal of a Utah middle school has been asked to apologize for forcing a kilt-wearing student to change his clothes.

Gavin says he wore the kilt twice in the past two weeks to Rocky Mountain Junior High as a prop for an art project. Jessop told the boy that the outfit could be misconstrued as cross-dressing.

Taggart says the district recognizes the kilt as an expression of the boy’s Scottish heritage and that the kilt was not inappropriate.

CLIFTON PARK, N.Y. —  A diner at an upstate New York restaurant got a little something extra with his broccoli — a severed snake head.

Jack Pendleton was at T.G.I. Friday’s in Clifton Park on Sunday when he spotted something gray mixed in with his vegetables and realized it was a snake head the size of his thumb, with part of the spine still attached.

Pendleton says he snapped a photo with his cell phone camera and called the waiter over. The manager said he’d never seen anything like it.

A spokeswoman for the Carrolton, Texas, chain says it’s investigating. The broccoli was pulled from the restaurant and others served by the same supplier. It wasn’t immediately known what type of snake was involved.

Pendleton and his girlfriend weren’t charged for their meals. He says he has no plans to sue.

“The manager came over white as a sheet,” Pendleton, 28, told TimesUnion.com. “He explained in five years he’d never run into anything like this.”

A British agent left top secret information about covert operations on a bus in South America when she lost her handbag while on assignment.

The drugs liaison officer lost a computer memory stick said to contain a list of undercover agents’ names and details with more than five years of intelligence work.

It happened when the MI6-trained agent left her handbag on a transit coach at El Dorado airport in Bogota, Colombia. Intelligence chiefs were forced to wind up operations and relocate dozens of agents and informants amid fears the device could fall into the hands of drugs barons.

The agent’s employer, the Serious Organised Crime Agency, Saturday confirmed the data loss but said it had happened soon after the agency had been set up in 2006, “while staff were still working to the data-handling policies of precursor agencies.”