Posted by Mactavish on Oct 27, 2010 in Entrepreneurship, Technology | 0 comments

WordPress as an ecommerce solution

I’ve always been fascinated by WordPress.

It’s an open source platform, and the brightest minds in technology constantly improve and expand its functionality and uses.

The WordPress team recently released Twenty Ten, a new theme that’s included with every new installation.  It’s highly customizable with a wide variety of bells and whistles (called plug-ins and widgets,) and it can also be stripped down and used for ecommerce when combined with a shopping cart solution, such as Mal’s cart.

A great example of a slick online store built on the theme is Hamagram.

Posted by Mactavish on Jul 9, 2010 in Randomness, Technology | 0 comments

1) Searching all of Craigslist.

You can search the entire Craigslist database with a simple Google search. Just enter your search keyword, then a space, and then site:craigslist.org. You’ll get results, categorized by city, from all over the planet.

Here’s how it looks: 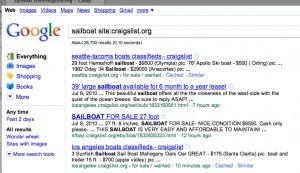 This is another very simple trick.  Just hold down the ‘alt’ key, and spell the vanity number on the keyboard as it’s written.  Be sure to use ‘o’ and not ‘zero’ in names such as COMCAST.

You see, blogs have these things called spam filters, so you’re wasting your time.

Or more accurately, your spambots are a waste of time.

If you own an HD TV, (which most of the newer ones are these days,) you can use old school rabbit ear antennae to pick up the digital signals available in your area.  As long as there are towers nearby, you can draw in the signals with no extra boosters, boxes, or gizmos aside from the rabbit ears.

Yesterday I did and experiment with my LG television:  unhooked Comcast cable, replaced it with a $10 antenna from K-Mart and w00t!, there it was.  Or I should say, there they were.  11 crystal clear HD channels, all for free.

Posted by Mactavish on Dec 18, 2009 in Entrepreneurship, Publishing, Technology | 0 comments

From blog to book…

Here’s a terrific article on the subject courtesy of Mashable.

I’ve followed several of the blogs for years, and can fully grasp the wisdom of a traditional publishing deal.  Blogs and books are reciprocal marketing platforms, and it makes sense to monetize every possible audience.

Posted by Mactavish on Jul 24, 2009 in Excursions, Technology | 0 comments

There goes the neighborhood… 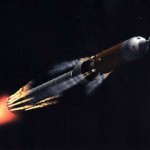 As the 40th-anniversary celebrations of the moon landing end, a human voyage to Mars remains a holy grail for NASA.

“We’re still looking at human exploration of Mars as one of the goals of the future at the top level,” said NASA researcher Bret Drake with Lunar and Mars Integration at Johnson Space Center in Houston. “Having a human actually set foot on another planet would be one of the greatest adventures possible, one of the greatest monuments to history.”

A crewed mission to the red planet is a daunting challenge that lies at the edge of current technological capabilities and possibly beyond. Still, NASA keeps a strategy to go there and constantly keeps up to date with new ideas.

“Mars is one of those targets of fascination that has been around a long time,” Drake said.