Posted by Mactavish on Apr 6, 2008 in Excursions, Gear, Tomfoolery | 0 comments

Yesterday, the wife and Louie went to visit Grandma.

We started with soccer practice at 0900. I coach Duey’s Hot Shots team, and Huey acts as my assistant coach. Ten kids showed up and we worked on basic dribbling skills and then held scrimmages with another team. Kids in the Hot Shots program are just learning the game, and coaching them is fun. Duey did a terrific job, and is a natural defender, just like his old man. Huey was a big help and the little kids really look up to him. It was a good practice session.

Next, we went back to the ranch, grabbed showers and then headed out for burgers at the Eagle’s Nest, a snack bar at the local golf course. The food was decent and cheap, and the boys were entertained by some pretty awful golf swings on the first tee.

Next, we headed out to the country with the BB Gun and empty Pepsi cans. The boys have shot before, so this was a practice session, and a chance to brush up on gun safety. We went off-road, found a huge field in the middle of nowhere, and started sending rounds downrange.

We plinked for an hour or so, and then heard an odd buzzing sound way off in the distance. Before long, a plane came into view, and it seemed to be cruising at about 1000 feet. As it got closer, the buzzing became quite loud, and we realized the ‘plane’ was actually an ultralight. I explained this to the boys, and as I was talking, Huey pointed up and said “Look! he’s turning toward us!” Indeed, the craft was making a hard left turn, and dropping quickly. Within a minute, it was fifty feet off the ground and approaching us very quickly. We watched as the craft touched down and cruised to a stop, roughly fifty yards from our position.

So, like any rational men would do, we packed up the targets and jumped in the Blazer and headed off to investigate.

We parked next to the craft, and saw the pilot topping off his gas tanks. We climbed out, and introduced ourselves, and were treated to a full debrief of the craft and the rules and regs that cover it by Lyman Hart, a very cool and knowledgeable pilot who lives a few counties over. Following are a few interesting aspects:

– It’s essentially a hang glider with a seat and engine.

– It has no joystick or yoke. You hold on to the glider bar and steer with your weight.

– It comes as a kit. You can buy it ready-to-fly, right out of the box, or in components.

– It has a parachute that can be deployed in case of emergency. An explosive device blasts the chute clear of the rig and then carries it down to safety.

– It is exempt from licensing under Part 103 of some FAA code. The larger ultralights require licenses but these ‘trikes’ do not.

– A full rig costs about the same as a new motorcycle.

– You can launch and land from your front yard.

We chatted with Lyman for fifteen minutes of so, said our farewells, and then watched as he taxied for takeoff. He rolled to the end of the field, turned, and then made a 100 yard dash across the grass. He then shot upward at a very steep and impressive angle. The boys, needless to say, were mesmerized, and when Lyman gave one last wave from 100 feet, they screamed “Cool, Dad, he’s waving at us!!”

We watched as he headed off into the winds, and then jumped back on-road for the trip home. Both boys stared after the trike as it disappeared into the ether.

So, it was a good great Man Day overall, and the unexpected arrival of an Ultralight was icing on the cake. Huge thanks to Lyman for the serendipitous landing and cordial debrief.

A thing of beauty…

I’ve been comparison shopping handguns and have spoken with a number of knowledgeable buddies, ranging from Navy Special Warfare guys to a retired combat Marine to a life-long hunter with a sweet gun collection.

I’ve narrowed it down to automatics made by Glock and Sig Sauer, and a Smith and Wesson revolver. I’m leaning toward the S&W.

Why? Because this particular model is highly resistant to rust and good for personal carry on boats. The blued automatics rust very quickly. The S&W is also slightly more mechanically reliable. Automatics tend to jam more than wheel guns.  And since this will be mainly for target shooting and self defense, I won’t need a weapon that’s more suited to close quarter combat, like the Glock.

Smith and Wesson 686 .357 with a four inch barrell and combat grips: 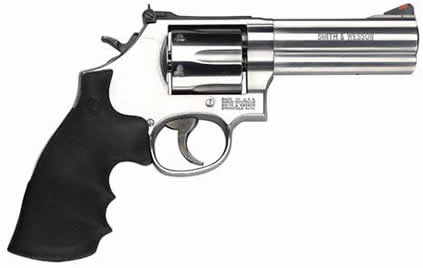